Travel is good for the soul and especially for the writer’s soul, in my opinion. After all, my first novel, Damaged Goods, came to me after a visit to a Scottish castle. But to be honest, I didn’t expect my trip to the Bahamas to be anything more than an escape from New England snowstorms.

Not to say that the Bahamas aren’t inspiring. As we flew over the first islands, the color of the water transfixed me—I didn’t just see that aqua blue ubiquitous from postcards, but also thin lines of iridescence outlining the land. Plus the warm wind, multicolored flowers, and white sand erased the memory of winter. Condos on Paradise Island? Hmm, worth thinking about?

For me the writer, the geography and history of Nassau, while fascinating, didn’t feed any of the stories in progress rumbling around in my head. It isn’t like I’m writing a book with a pirate as a central character. Or one about a religious refugee sailing south for a new home. Or even one about a sailor paid by Spaniards to find gold. But on a visit to a historic plantation site, I learned something new, a detail that is perfect for my third planned novel.

Bahamas Clifton Heritage National Park sits at the far west of New Providence, a collection of ruined cabins and a manor house that speaks to the island’s slave-holding past. When those religious refugees settled on the many islands of the Bahamas, including New Providence, they brought their slaves with them. But at the conclusion of the American Revolutionary War, the British Crown rewarded many of its Loyalists with acres of land, and as these farmers settled there with their “property,” the population of slaves ballooned. At least one of those plantation owners came from Georgia. And that got me thinking.

Part of my third planned novel takes place in Georgia in the late 1700s, where the main character lives for a while as a slave. I hadn’t yet considered the politics of the time and the fact that post-war, many Loyalists would have left from all parts of the colonies, including Georgia. What if, as they fled, the plantation I’m writing about grew? What happened to the land these British subjects left behind? Did they sell it? Did it go to the US government? Did the owners that remained simply annex the land? Food for thought.

Clearly, I need to do some research on the history of land acquisition in the American south after the Revolution. It might be a small detail, maybe only a paragraph or two, but it’s something that fleshes out the life of the people I am writing about. It’s something I had not considered, and I hope that my readers, eventually, will find it interesting. Perhaps my Bahamian vacation gave me inspiration after all. 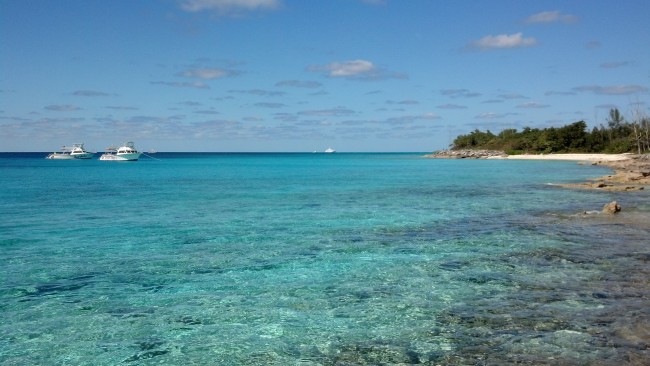 The beach at the edge of Bahamas Clifton Heritage National Park. A nice view for a Loyalist plantation owner from Georgia. However, Bahamian topsoil is practically nonexistent, making farming difficult – no matter how many slaves he owned to till the fields.